Job Outlook to 2026 by Educational Requirement

The first blog in our series on the 2016 to 2026 employment outlook focused on how an aging population is expected to constrain job growth. The second focused on how the occupational job structure is expected to continue to gradually shift. Those shifts have implications for the educational requirements of the labor force, which is the focus of this blog.

Performance and educational requirements differ from one occupation to another. Some jobs require little experience or education, others extensive experience or education, with a whole range in between. So as the mix of jobs changes, the educational requirements of the labor force also change. Additionally, the requirements to successfully perform the functions of most occupations changes over time as technology and work practices evolve, and other factors impact the way the functions of a job are performed.

About 77 percent of jobs in Maine are in occupations that have a “usual education requirement” that falls within one of seven levels of attainment: high school or equivalency; some college, but no degree; post-secondary non-degree award; associate’s degree; bachelor’s degree; master’s degree; or doctoral or professional degree. Non-degree certifications can be achieved through apprenticeship programs, as well as through educational institutions.

Another 23 percent of jobs are in occupations that do not have a usual educational requirement. This does not mean that they are jobs for people who have not graduated from high school. Some of these jobs are available to non-graduates or teens who have not yet graduated, but many more require certain skills or expertise, but there is no “usual” educational path. This includes some occupations that pay well and in which many incumbents have postsecondary education or training, extensive experience, or specialized skills, such as many jobs in the arts, construction, entertainment and athletics, food preparation, and protective service.

For many occupations there are exceptions to the usual requirement; for many others there are strict requirements. People of all levels of educational attainment may become managers, though the usual requirement for most management occupations is some form of degree. Some registered nurses have an associate’s degree, though most have a bachelor’s, which is preferred by hospitals today. For other occupations an individual must complete a specific educational program and pass qualifying exams to work in the profession, such as physicians and lawyers. 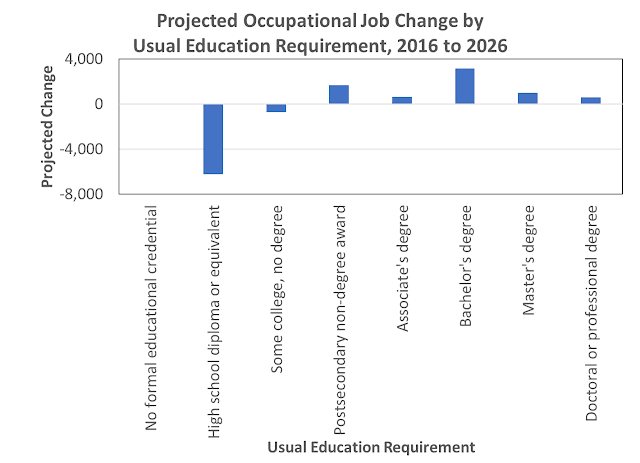 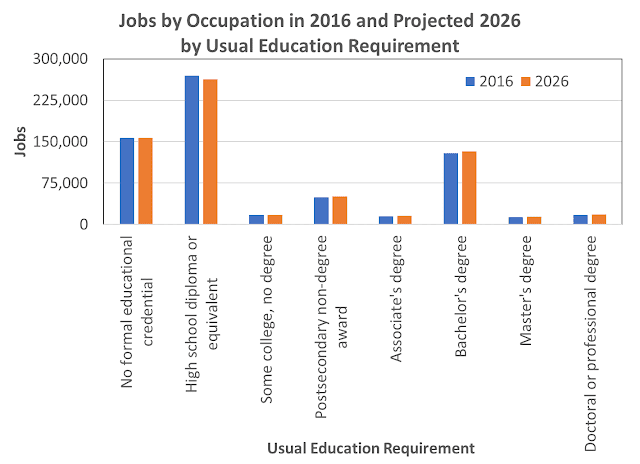 The expected net decline of 7,000 jobs in occupations that do not require postsecondary education does not mean we expect that many people will lose their jobs. The flow of young people into the labor force, older people into retirement, as well as individuals advancing their education or experience to move up the career ladder more than offsets those net declines. In fact, three quarters of all job openings – nearly 56,000 per year – are expected in occupations that do not require more than a high school diploma. 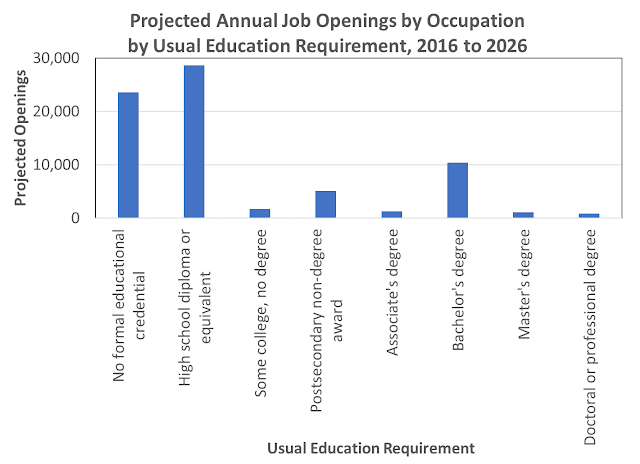 The reason there will be so many openings in occupations in which the total number of jobs is expected decline is that there is a strong correlation between the earnings and education requirements of jobs on-the-one-hand, and turnover rates on the other. Occupations with high education requirements that generally pay well tend to have an older, more established workforce that has low rates of turnover. Occupations with limited education requirements that generally offer relatively low pay tend to have a younger, less established workforce that has higher rates of turnover and many more job openings, which can be seen in the last chart. 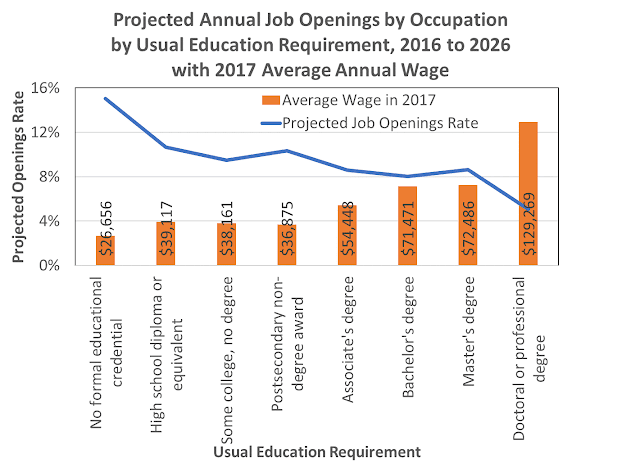 There have been many claims in recent years of the dramatic shifts around the education requirements of the workforce in the years ahead. It is true that technology is disrupting industries, creating new fields of work and making others obsolete, and is changing how functions are performed and who does them. It is not true that the level of educational requirements of the workforce is likely to change dramatically in just a decade. Rather, the changes in the mix of jobs and their education requirements are likely to continue to be gradual, as they have been for many years.

Finally, a rising share of middle-wage jobs are in occupations that usually require education beyond high school. Middle-wage jobs performing routine functions that have traditionally been available to people with a high school diploma will continue to be eliminated by automation and technology applications. To maintain a middle-wage standard of living, many people will need to advance their education. 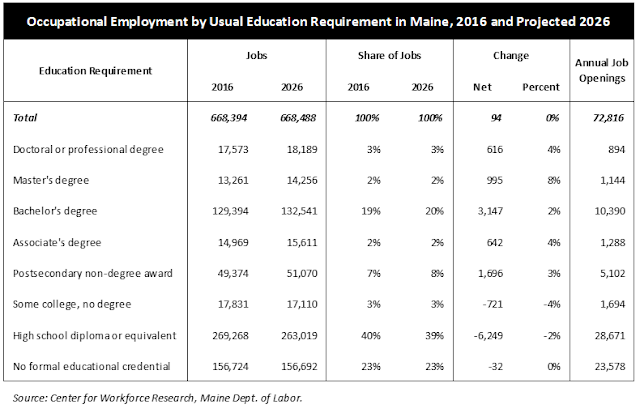 This has been a very general description of one aspect of our occupational employment projections to 2026. Detail on over 600 individual occupations, including expected growth or decline, openings, and wages is available at www.maine.gov/labor/cwri/outlook.html. Users can generate charts or tables for occupations by number of expected job openings, rate of change, or net change by education requirement, and can look at the outlook for individual occupations or groups. 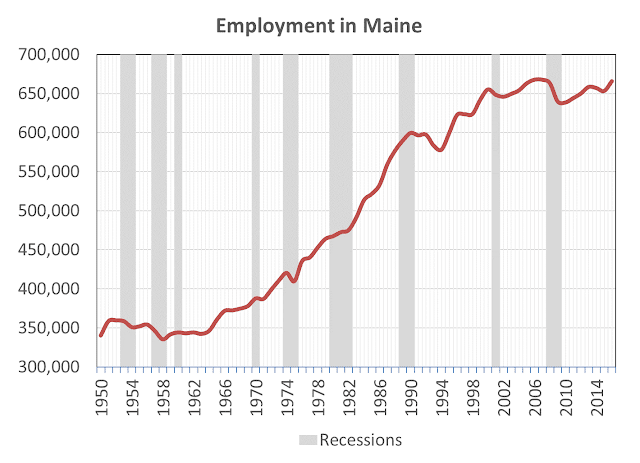 Employment Outlook to 2026
Workforce conditions in Maine are very tight in 2018, with unemployment and other measures of labor market slack at historically low levels. This is a positive development for individuals, but a challenge for employers who are concerned about future labor availability. This blog provides context to how this situation developed, then looks at our forecast for employment through 2026.
How We Reached This Point
From the early 1960s until 2007, employment in Maine nearly doubled. The rate of growth slowed in the 1990s, and, except for the decline and recovery during and after the 2008 and 2009 recession, employment has been relatively unchanged over the last decade. This recent lack of growth is because the prime working-age population of the state has contracted modestly. Combined with strong economic conditions, this has created a very competitive hiring and retention environment that has driven inflation-adjusted average wages up at the fastest rate in nearly …
Read more

Understanding the Employment Situation in Maine

May 22, 2020
On Friday May 22, the Center for Workforce Research and Information (CWRI) and U.S. Bureau of Labor Statistics (BLS) released April workforce estimates for Maine. These include estimates of the unemployment rate and the change in nonfarm payroll jobs. The COVID-19 pandemic caused unprecedented job loss in Maine and the nation in the last two months. It also created significant data collection and estimation challenges. This document provides information on how these estimates are derived, what some of the challenges were for collection and estimation, and then answers some questions we expect to arise.
How this data is collected The U.S. Bureau of Labor Statistics enters into cooperative agreements with state workforce agencies to collaboratively produce and disseminate workforce data. Two programs, Current Employment Statistics (CES) and Local Area Unemployment Statistics (LAUS), are designed to provide a monthly indication of workforce conditions and trends. Data from those programs…
Read more